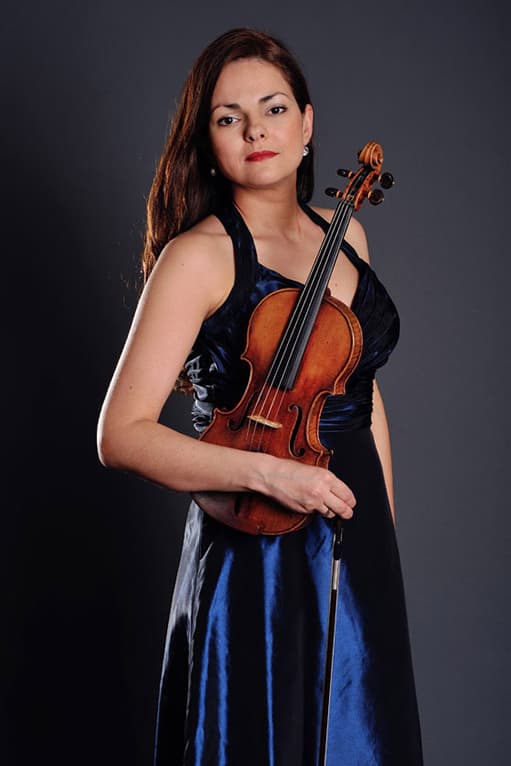 I’m always thrilled to share music, friendship, journeys and so many adventures with the magnificent musicians of Kheops. It’s a joy to come together each time!

One of the most inspiring violinists of our time, Tatiana Samouil is in constant demand as a soloist, recording artist, chamber musician and pedagogue.

An ambassador of the Russian School, she starred alongside Yuri Bashmet at the closing ceremony of 2014 Olympic Games in Sochi (Russia) performing for a live audience of forty thousand people, as well as an almost three billions online broadcast, worldwide. It comes as no surprise that her name appears in The Golden Book of Twenty to Twenty First Century Talents of Russia, stored in the Kremlin Palace.

She often shares the stage with other great musicians of our time; Yuri Bashmet, Denis Matsuev, Maxim Vengerov, Vadim Repin, Gautier Capuçon, Gérard Caussé, Augustin Dumay, Frans Helmerson and Gary Hofmann have performed alongside her. Tatiana has enjoyed performing with the conductors such as Antonio Pappano, Christian Arming, Kazushi Ono, Dmitry Liss, Gilbert Varga, Jean-Jacques Kantorow and many others.

She is also an experienced chamber musician. She was a founding member of Malibran quartet, and is also a member of the Kheops ensemble.

Tatiana is a passionate pedagogue. She teaches violin at the Antwerpen Royal Conservatory in Belgium and at the Musikene Superior Arts Centre in San Sebastián (Spain). As a permanent member of Yuri Bashmet Academy, she gives master classes all over Russia. Tatiana is regularly invited to perform with Yuri Bashmet and his Moscow Soloists Orchestra, as well as Novaya Rossiya Symphony.

Tatiana Samouil's numerous recordings and distinguished discography mirror her musical passion and adventurous spirit. Her recording of works by Eugène Ysaÿe with the Liège Philharmonic under the baton of Jean-Jacques Kantorow received ‘Diapason d'Or’, the highest award of the French Music Magazine ‘Diapason’. Her latest recording of the major French sonatas with David Lively, under Indesens, received ‘Choc’ from Classica Magazine (February 2019)

Over those years, Tatiana has had the privilege of performing and recording on instruments such as the Guarnerius del Gesù violin ‘ex-Vieuxtemps’, the Antonio Stradivarius ‘ex- Kreisler’, as well as a violins of Jean-Baptiste Vuillaume and François Pique.

Tatiana currently plays a 1770 Nicolò Gagliano violin and a modern violin made for her by Christian Bayon.